On his first big day of speeches and appearances in Washington DC, Pope Francis drew on his own immigrant history to speak out on behalf of immigrants and encourage immigration reform.  Perhaps his words may help move lawmakers to do what politics has kept them from doing for too long. 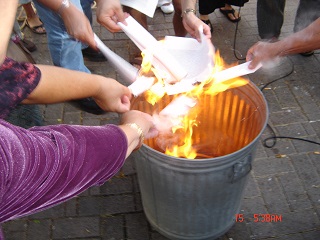 Calling for an end to the Doctrine of Discovery, protesters burn mock Papal Bulls in a protest in downtown Honolulu a few years ago.

Is it too much to hope also that tomorrow, when he addresses Congress, and later when he speaks at the United Nations, he will disavow the dehumanizing Doctrine of Discovery that Papal Bulls made possible? That odious doctrine legitimized European seizure of indigenous lands in the name of Christianity  and the forcible conversion of peoples who were colonized. The cultural trauma that is a legacy of that time still endures with Native Americans and other indigenous peoples worldwide.

It’s time to disown it and end the authority it gives to contemporary law, an authority that keeps indigenous peoples from seeking or getting justice.

Tagged with: Doctrine of Discovery
Posted in Catholic Social Doctrine, I BLOG