Years of determined grassroots activism culminated in a rally at the Hawaii State Capitol that helped persuade lawmakers to pass the nation’s first ban on chlorpyrifos. 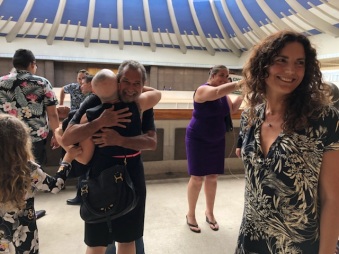 I am drawn to working with others on social justice, environmental and community-building issues.

In 2021, after three years of building community awareness and lifting up voices from the community, Automatic Voter Registration (AVR) became a reality in Hawaii. Together with Vote By Mail (VBM), AVR will help ensure greater participation in our democracy.

Work on elevating the importance of supporting public health measures such as a tax on Sugar-Sweetened Beverages continued into 2022, but despite the impact on communities especially hard-hit by COVID-19 and other serious diseases, lawmakers chose not to move this bill forward. The Hawaii Public Health Institute and its coalition partners will continue to raise the alarm on the need for this and other urgently needed health policies in 2023.

2022 was a year of many virtual meetings with the grassroots networks served by Kuaʻāina Ulu ʻAuamo to track progress and raise awareness of the critical place-based work being done by communities across the islands to ensure that people can, not just survive, but thrive into the future. The designation  of the second Community-Based Sustainable Fishing Areas (CBSFA) in Miloliʻi (Hawai’i) has raised the profile of, and injected a new urgency into this effort to ensure abundance in the waters that have fed so many for generations.  The first CBSFA was at Hāʻena (Kaua’i). Other communities like Kīpahulu (Maui) continue to pursue this goal, urging more responsive government support, and remain guided by the  wisdom of kupuna like Uncle “Mac” Poepoe of Hui Mālama o Moʻomomi.

2022 also saw the introduction of water cremation to the islands, led by Aloha Mortuary.

Water cremation or alkaline hydrolysis, is a gentle water-based processing method that mimics the natural decomposition process. Its minimal carbon footprint is aiding its rapid adoption worldwide. The water left  from the process can be used to water plants thereby completing the cycle of life. It makes possible traditional Native Hawaiian end-of-life practices for the first time in generations but is also available to anyone who yearns for a green exit from the planet.

The continuing preventable loss of life through alcohol-impaired driving has spurred a coalition to push for the raising of the permissible Blood Alcohol Concentration (BAC) level. I am proud to be working with the Hawaii Alcohol Policy Alliance to raise awareness of this issue and urge action to save lives.

2018 saw the passage of the nation’s first ban on the neurotoxin, chlorpyrifos. Working with the coalition including the Hawaii Alliance for Progressive Action, Hawaii SEED, and others in what was, for many, a multi-year grassroots effort, was an honor and an education.

In 2017, supporting the efforts of Hawaii Appleseed led to tax fairness legislation that lessened the disproportionate tax burden on low income workers.
2017 also saw the passage of Kupuna Care, legislation that provided some financial assistance to help families caring for seniors and ailing or disabled family members at home. 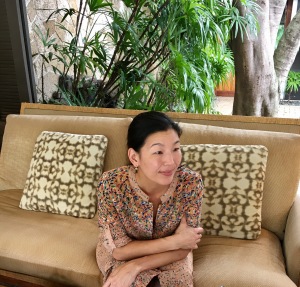 Ai-jen Poo, Co-Director of Caring Across Generations came to Hawaii to support passage of the Kupuna Care legislation. 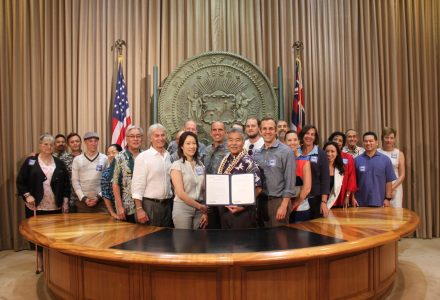 Campaigns in 2016 included supporting the work of  KUA, an innovative, community-based initiative for protecting, restoring and caring for Hawaiʻi’s unique native species, ecosystems and island way of life.

2014/2015 issues included promoting renewable energy (geothermal); raising the profile of the Native Arts and Cultures Foundation, advancing mediation in place of litigation, and supporting the DIVEST UH movement. The workings of democracy, the role of neighborhood boards, and the need for greater transparency have also been the subject of my attention and writing.

Worked with Native Hawaiian LGBT rights advocates, Tambry and Suzanne Young, social justice activists from Massachusetts, Patricia Gozemba and Karen Kahn and other allies on passage of Civil Unions in Hawai`i. Supported the push for marriage equality in Hawaii and the call for a more welcoming stance from the Catholic church. Helped gather support for, and usher in, the Sustainable Business Corporations (B-Corps) Act in 2011, making Hawaii one of the leaders in encouraging corporations to commit to the Triple Bottom Line: people, planet and profits. Worked with the Department of Land and Natural Resources, the Sierra Club, Surfrider Foundation and others on a bill to place a fee on plastic bags that would help fund clean up of the waterways and conservation. This effort helped raise awareness and add momentum to efforts to address the hazards of plastic bags clogging and fouling the island’s waterways and the ocean.

As a dissident Catholic, I continue to speak out for an end to patriarchal practices in the church and greater fidelity to Gospel values.