Home › I BLOG › Guest Post: “Our witness more needed today than ever.”

Guest Post: “Our witness more needed today than ever.” 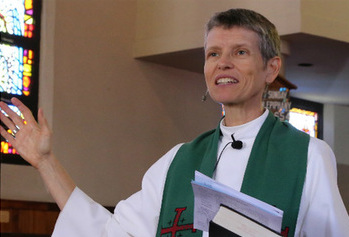 These words from the Rector of St. Peter’s Episcopal Church in Honolulu, Rev. Diane Martinson were delivered in church the Sunday following the Nov. 8, 2016 election. This message is also posted on the church website.

We have just concluded one of the most turbulent election cycles most of us can remember living through.  It has become painfully apparent, whether we realized it before or not, how deeply divided we are as a country.  Some are saying that the results of this election have changed everything—-some saying this with hope and anticipation, some saying this with dismay and fear.  The contrast is stark, the chasm wide, but there is one thing around which we must unite: During this election season, crude, hurtful, bigoted things were said, allowed, and even encouraged the likes of which we have not seen before in a presidential campaign.  We heard it in speech and chants, read it in social media postings, and saw it in merchandise that brazenly flaunted demeaning and degrading slogans.  Whether the feelings expressed were deeply held or rationalized as being justified, no matter how offensive, as a means toward reaching a desired end (something that is troubling in and of itself), it emboldened a segment within our nation to embrace behavior and speech that is abusive, insulting, and dehumanizing.
That is not the way of Jesus, and we need to speak up and say so.

This year’s election has certainly spun our nation into great change, but our work as Christians remains the same today as it was before the election.  Our allegiance as Christians is first and foremost to the gospel and not to a nation or a political party or a candidate.  We are always called to be a voice of critique to the political powers, whatever and whoever they may be—a voice of critique that reminds the world that, created in the image of God, we are all called to care for one another, in all of our diversity, especially those who are the most vulnerable amongst us, the widows and orphans, the hungry, the naked, the sick, those in prison, those who are marginalized and cast aside.

We are called to provide welcome to the stranger and to be humble in our dealings with others, remembering that Jesus told his disciples multiple times that the first shall be last and the last shall be first. We are cautioned about wealth, to share what we have, to provide for the poor, and to look to heaven for our treasure. We are told that we must be peacemakers, rendering to no one evil for evil, overcoming evil with good. We are reminded that there is no longer Jew or Greek, slave or free, male and female, for we are all one in Christ Jesus.
And, we are commanded to care for this precious earth which God created and on which we live.

The prophet Micah summed up God’s direction for humanity in an easily remembered way:  Seek justice. Love mercy. Walk humbly with your God.
In the Christian baptismal covenant as followers of Jesus, we are asked: “Will you seek and serve Christ in all persons, loving your neighbor as yourself?”; and another, “Will you strive for justice and peace among all people, and respect the dignity of every human being?”  The Christian response, not just at the time of our baptism but every day, is: “I will, with God’s help.”
Our work as Christians is clear and our witness more needed today than ever.
With thanks to Rev. Diane Martinson for permission to publish this message.