Home › I BLOG › Does the institutional church have a role left to play?

Does the institutional church have a role left to play?

The editors of America would have us believe this:

“The church has an important role to play as the next four years of Mr. Trump’s presidency unfold. It must offer clear and vigorous moral guidance, not limiting itself to the anti-abortion promises to which Mr. Trump must be held but also speaking on issues of immigration, racial discrimination, international peace and social welfare. The church must stand firm in rejecting any return to the insults, misogyny and devaluation of human dignity that characterized much of Mr. Trump’s campaign rhetoric. The church must also offer the wisdom of Catholic social teaching to help shape proposals for addressing legitimate concerns about economic stagnation among those globalization has left behind without scapegoating the poor and retreating into isolationism and xenophobia.

Even more than its public moral witness, the church must encourage Catholics to find practical solidarity with their political opponents, sharing worship and conversation and the works of mercy.”

From which bishop’s mansion, and from which Catholic pulpit will the “public moral witness,” that has been conspicuously absent these many months be heard?

Why should Catholics expect to hear “clear and vigorous moral guidance” when it has not been provided throughout the campaign, with a few brave exceptions?

Did the bishops whisper their rejection of the “insults, misogyny and devaluation of human dignity that characterized much of Mr. Trump’s campaign rhetoric?”  Because it sure was not audible from the pews, or in living rooms across the nation as people digested that rhetoric from their television sets or social media networks. The silence of the bishops and their lack of outrage could only mean one thing: Donald Trump’s past sins were not grave enough to give us pause, and his “promises” for the future could be accepted. They were not nearly as bad, surely, as Hillary Clinton’s sins of having a private email server  and supporting a woman’s right to manage her own body?

Why should we believe that the leadership of the Catholic church will now stop defining everything through the lens of being “anti-abortion?”

Why should we not understand that the pattern of silence of these men aided the ignorance of those in the pews? Men who conspired to protect those who committed unspeakable crimes against children and who still refuse to welcome women as equals into the priesthood. Some  voters reportedly have said God would not want a woman to be president. Presumably that meant God would want them to vote for the white male alternative, even if he preyed on women, insulted and denigrated people of other ethnicities, and fostered violence and war. 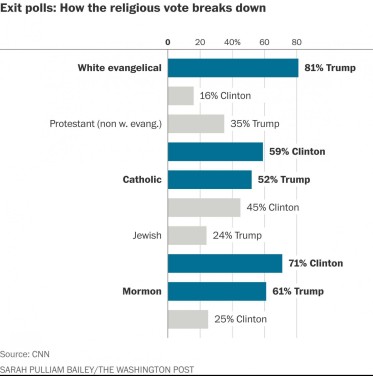 And so 52% of Catholics and 81% of white evangelicals voted for Donald Trump for President.

The public moral witness as a bulwark against a Trump presidency will come, not from the bishops, but from those brave faith leaders, nationally and locally, who led the call for a moral revolution  to champion the sacred values of love, justice, and mercy in the public square.  The public moral witness to those values will come from ordinary Americans, Catholics and non-Catholics, who gather together in solidarity to organize, organize, organize in defense of the most vulnerable among us. In this time of great peril, we cannot afford the luxury of waiting for the bishops.

Tagged with: America, Hillary Clinton, moral revolution, Trump, US Bishops
Posted in I BLOG, Politics and Religion, Uncategorized, US Bishops

4 comments on “Does the institutional church have a role left to play?”