There was no shortage of men with institutional power and access to the pulpit, but it took a woman to speak publicly about supporting the President as he worked in the face of Republican obstructionism to make the Affordable Healthcare Act a reality for millions who had no coverage. And once again in this the craziest of elections, it has taken a woman to stand with other faith leaders to call for a Moral Agenda. 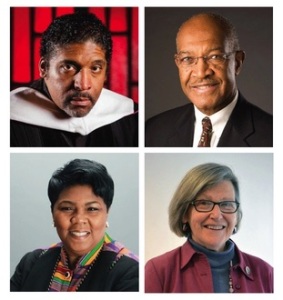 While the bishops remain silent and M.I.A., it is Sr. Simone Campbell who has stepped up once again to  be the Catholic voice of conscience for the nation. She has joined Rev. Dr. William Barber II, Rev. Dr. James Forbes and Rev. Dr. Traci Blackmon to

“declare that the deepest public concerns of our nation and faith traditions are how our society treats the poor, those on the margins, the least of these, women, children, workers, immigrants and the sick; equality and representation under the law; and the desire for peace, love and harmony within and among nations.

Together, we lift up and defend the most sacred moral principles of our faith and constitutional values, which are: the economic liberation of all people; ensuring every child receives access to quality education; healthcare access for all; criminal justice reform; and ensuring historically marginalized communities have equal protection under the law.”

Was no Catholic bishop interested in lending their voice to this call?

The Catholic bishops’ guide to “Forming Consciences for Faithful Citizenship” reads like a missive from another planet. Top of the list of what should guide our consciences is still management of the woman’s womb.

In the challenge to “advance a moral agenda” by the four faith leaders, one hears a strong, clear call for social justice in all its multi-faceted complexity.  By contrast, the bishops’ document offers more of the disconnected bureaucratese lay Catholics have grown weary of hearing.  It’s not that the bishops don’t talk about refugees or the need for peace or economic justice. They do. But there is no mistaking their top priorities or how they intend to steer voters.

-The ongoing destruction of over one million innocent human lives each year to abortion.

-The re-definition of marriage

And the bishops’ election guide closes by telling Catholics to “ask candidates how they intend to help the nation pursue these important goals:

-Address the preeminent requirement to protect the weakest in our midst–innocent unborn children–by restricting and bringing to an end the destruction of unborn children through abortion…..

-Protect the fundamental understanding of marriage as the lifelong and faithful union of one man and one woman….promote the complementarity of the sexes and reject false “gender” ideologies….”

The bishops apparently did not hear what everyone else did in recent weeks: the sound of integrity and principle being flushed down the toilet as one GOP leader after another pledged loyalty to their racist, misogynist, xenophobic nominee and the party. Many of those ‘leaders” are proudly Catholic. The bishops, by their silence, stand with them.

Most Catholics, I would guess, stand with Sr. Simone Campbell. Fallen away Catholics certainly do and they are the second largest, and possibly the largest “denomination” in the US. Their numbers keep growing as the bishops once again mistakenly take the people in the pews to be deaf, blind and incapable of being guided by their own conscience. If there were lessons in the dereliction of duty relating to the sex abuse crisis and the lives that were ruined by the absence of principled leadership, they appear to be lessons not entirely embraced by the bishops who still operate in their own insulated orbit of diminishing power and influence.

If you would like to add your name to the Groundswell campaign:  https://action.groundswell-mvmt.org/petitions/will-you-advance-a-moral-agenda

Posted in I BLOG, Politics and Religion, Uncategorized, US Bishops