The pindrop silence from church leaders is deafening

When marriage equality was still just an idea looming on the horizon, it drove some church leaders to accept strange bedfellows. Coalitions were formed. Rallies were held. Legislators were lobbied. Pastors wrote open letters to their congregations warning of dire consequences if LGBT couples were allowed to marry. Despite the churches’ very high profile campaign they failed to stop the enactment of marriage equality laws.

Has that failure made them shy? Is that why they have not, with few exceptions, rejected the very real challenge to Christian principles seen routinely now in our political discourse? Do they worry that their tax exempt status might be placed in jeopardy by appearing to attack a particular candidate? At what point do they acknowledge that the language and behavior of one of our Presidential candidates crosses a moral threshold?

When a candidate is described as a “walking affront to the Gospels” by the conservative head of the Ethics and Religious Liberty Commission of the Southern Baptist Convention, one has to ask, “Are there no other champions for the Gospel willing to push back?” 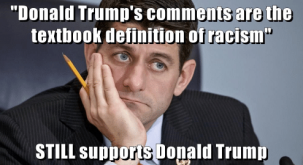 Speaker Paul Ryan likes to invoke his Catholic faith and talk about religious freedom. And he continues to support Trump.

We have been fed for months with a relentless diet of hate, racism, misogyny, lies, xenophobia, and a tasteless mocking of the disabled and those who cannot fight back. Babies included. Yet none of this seems to have risen to the importance of marriage equality or women’s reproductive rights, at least as far as many church leaders are concerned. Why are pastors not expressing their outrage?

New York Times columnist Charles Blow describes the GOP nominee, accurately, as “the paragon of racial, ethnic and religious hostility” and “the hobgoblin of retrograde racial hegemony.” Yet there has been no outcry from our churches, no chorus of condemnation for his manifestly un-Christian pronouncements, or his record of leaving contractors unpaid, employees bullied, investors cheated, and students scammed.

Are pastors for the Prince of Peace not repelled by calls to “bomb the hell out of ISIS,” to root out extremists “viciously?” Do our pastors accept as Christian the calls to “take out the families of terrorists,” to use torture, to go “beyond water-boarding,” to be ready to unleash nuclear weapons?

Where are the pastors who led their congregations in praying, and imploring legislators to deny homosexuals the civil protections of marriage? Where is their outrage? Why are they not once again in the public square denouncing hate speech, the demonizing of refugees and immigrants, and the incitements to violence?

Why are they not asking their congregations, “What would Jesus do?”

Why are they not talking about the sanctity of immigrant lives, refugee lives, Black Lives, Muslim lives?

People in the pews deserve to know if their pastors think that feeding off the Alt-Right movement led by people like Steve Bannon of Brietbart News is Christian. The so-called alternative right movement peddles the fiction that white people are being victimized by social justice efforts like Black Lives Matter, and threatened by political correctness, immigrants and Muslims.

We should acknowledge that there is some advice coming from church leaders. The election guide from the US Conference of Catholic Bishops opens and closes by telling the faithful to ask how candidates will protect unborn children, and defend traditional marriage. Apparently, in the face of the hate being peddled in the public square, those remain the priorities.

Conservative columnist David Brooks recently said of fellow Republicans who refuse to disavow what is patently morally reprehensible: “If you are not in revolt, you are in cahoots.”

The same might be said of pastors who remain silent.