Home › Business and Justice › A Living Wage: In Utah, as in Hawaii, lawmakers say no to struggling workers

A Living Wage: In Utah, as in Hawaii, lawmakers say no to struggling workers

The Fight for $15 in Hawaii ground to a halt in late February this year when it reached the Senate’s Ways and Means Committee, chaired by Senator Donovan Dela Cruz, a Democrat. The effort to help workers make ends meet is a battle being waged in other states  too. In Utah, House Minority Leader Brian King, D-Salt Lake City, tried to move the minimum wage from $7.25 an hour to $12 an hour by July 2022. He was stopped by Republican lawmakers who did not even debate the bill before voting NO.  King explained that his bill was motivated by the fact that workers were struggling as housing costs rise and affordable homes become more scarce in Utah.

Ciera Neale, 22, understands this struggle. Four years into her job as a gallery host at the Hyatt in Salt Lake City, Cottonwood, she is making $11.81 an hour. She started at $11 an hour.  The Salt Lake City native loves her job and hopes she can grow into a more senior position that pays better. But meanwhile, she and her boyfriend live with her parents rent-free. She loves that the Affordable Care Act allows her to remain on her parents’ insurance for now.

“I’m so grateful my parents also help me with college tuition and with other emergencies that arise,” she said. “Even with us pooling our wages, my boyfriend and I cannot live independently.”

Neale’s duties are wide-ranging. She started in the kitchen, has worked the front desk, handles vendor-ordering, has been a banquet host and helps with event planning. She is getting a look at different facets of the hospitality business that she hopes will prepare her to assume greater responsibility.

“I’m majoring in Psychology and I hope that will lead me into a fuller professional career path at the Hyatt. I do love the company and the hotel discounts I enjoy when I travel. But I need to find ways to improve my income. I work 40-50 hours a week. I say YES to any extra  hours I can get to just help make ends meet,” she added.

While she has generally shied away from politics because she hates the negativity, lack of civility and the disrespect to women, she is determined to vote in the mid-term elections. “I am registered to vote but I have not voted yet. But I will. This time I will,” she says with determination. That determination springs from a clearer understanding of how politics and politicians can, and do impact her life and the lives of people she cares about.

“I have a transgender friend who cannot understand how his parents can support President Trump when this administration’s policies hurt him,” she notes. 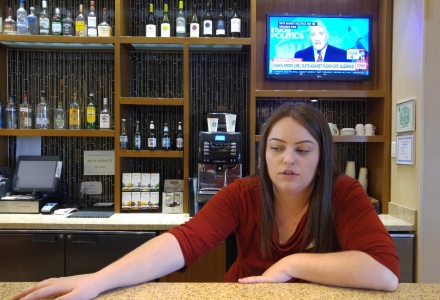 She also recalls the struggle she had when her grandmother passed away earlier this year. “All I could take was three days bereavement leave. It really wasn’t enough to grieve properly and attend to everything surrounding her funeral. I had to come to work and then go attend her funeral service from work. Death comes at the most inconvenient times and to expect people to bounce back and be as good as new in three days is just expecting too much,” she said.

Asked about the idea of a state paid family leave plan, she said she would welcome it as something that will help all workers deal with life’s sudden emergencies and not be devastated financially and emotionally.

“We never know when a crisis will arise. Paid family leave would be such a great help in coping with the crisis and emerging whole,” she said.

Reminded about the many women who are now running for office, Ciera smiled shyly and said she wasn’t ready but she certainly would give some thought to whether she might do that herself someday.

Meanwhile, her financial goal is to somehow, in 10 years, accumulate enough savings with her boyfriend to buy a house together.

Hopefully, Ciera will become politically engaged sooner rather than later. It will be good to see her join other advocates in doing something about the fact that Utah’s wage gender gap is one of the largest in the nation.

Research shows that women in Utah get paid about 70 cents to every dollar a man makes for the same job.

One comment on “A Living Wage: In Utah, as in Hawaii, lawmakers say no to struggling workers”