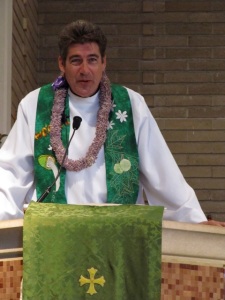 There’s a new show on Netflix that’s catching a lot of attention.

It’s a true story about a guy falsely accused of murder, who, two months after his release from prison, is arrested again, because a woman is found dead on his lawn. The question the show asks is: is he a killer, or is he being set up by the same law enforcement folks who falsely accused him in the first place?

I don’t know how this will turn out, but there are, sad to say, many examples of law enforcement officials falsely prosecuting people they know are not guilty; and I have to say, I often wonder how a person sworn to uphold law and order could do such a thing.

A friend suggested that people who can put an innocent in jail must be people who don’t feel connected to other people; that they live in a world of us against them, that a need to feel powerful motivates atrocities like this… That, sadly, makes sense…

I’m thinking about such things because our faith in general, and today’s gospel in particular, remind us that connection; with each other, with this good earth, with God, is the very heart of our faith. It’s said that in the other three gospels, Jesus tells parables; but in John’s gospel, Jesus is the parable.

We get that today as Jesus tells the uncomprehending Pharisees that he is not only the shepherd, but he is also the gate through which shepherd and sheep go in and out, as they shake their collective head, not having a clue what he’s talking about.

In other places in John’s gospel, Jesus is the bread of life, the living water, the Way, the Truth and the Life, the Word through whom all things exist… so that in Jesus, we are connected not only with the things necessary to sustain life, like bread and water, but we are also connected to one another, and to God, as we are called to open our eyes to truth, to let down our guards and so experience real life, to relish the magnificent freedom that comes when we finally allow ourselves to accept that all of creation is nothing less than the sheer overflowing of love and compassion of the God who is madly in love with each and every human being, with every part of this good earth.

Thomas Merton, the monk and  prophet of peace, encountered this reality in stunning fashion one day, while standing at, of all places, a Kentucky bus stop

…“in Louisville, at the corner of Fourth and Walnut, in the center of the shopping district, where I was suddenly overwhelmed with the realization that I loved all those people, that they were mine and I theirs, that we could not be alien to one another even though we were total strangers.

It was like waking from a dream of separateness, of spurious self-isolation in a special world, the world of renunciation and supposed holiness…

This sense of liberation from an illusory difference was such a relief and such a joy to me that I almost laughed out loud… I saw with perfect clarity the immense joy of being human, a member of a race in which God Himself became incarnate.

How could the sorrows and stupidities of the human condition overwhelm me … now that I realize what we all are? If only everybody could realize this! It cannot be explained. There is no way of telling people that they are all walking around shining like the sun. If only we could see each other that way all the time.

There would be no more war, no more hatred, no more cruelty, no more greed. The only problem is — we would fall down and worship each other.”  T. Merton, Conjectures, 156.

This is what Jesus is trying to get across to the Pharisees this morning.

You see, this story follows immediately after the story we heard during Lent, about the man born blind, as Jesus takes dirt and spit and, reenacting creation itself, gives the man new eyes. The religious tightwads won’t believe their eyes when this happens.

Remember the story? They first say the cured fellow isn’t actually the blind man, just someone who looks like him. Then they accost the man and three times demand from him an explanation, which he gives, and they throw him out; but not before putting the man’s parents on the hot seat.

This is what gets Jesus talking about sheep and shepherds and gates and voices and thieves and robbers today… He is again inviting the blind to see; yet if we miss our connections, we remain blind.

Grabbing a hold of our true situation, asking for the grace to see and touch the connections that are the ties that bind us all, one to the other, it’s never been more important than today.

Today, the ill winds of nationalism and fear of “the other” are blowing around the world, and these winds seek to separate us from one another, to deny the image of God that exists in every single human being, to justify ultimately slaughter and suffering whether on the Korean Peninsula or in the deprivation of health care to our most vulnerable. 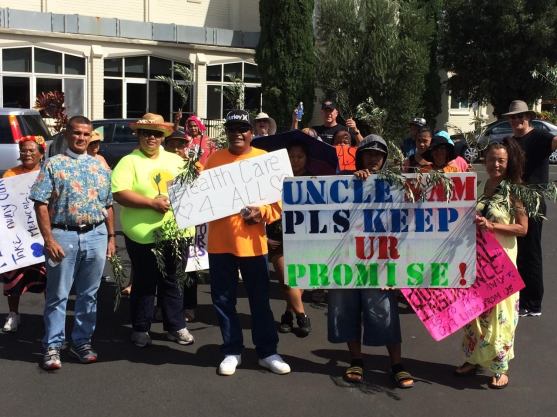 Members of the St. Elizabeth family gather outside the church with a very clear message: Uphold the Compact of Free Association

Now more than ever we Christians are called to renew our love of the gentle Messiah whose voice we know; and to trust the path he invites us to walk.

So when Jesus becomes the parable in John’s gospel as “I am” — the bread, the living water, the good shepherd, and the very entry point, yes, the very gate of God; Jesus is saying about himself what Paul has been telling us all along: that Jesus and God are one and the same, that when we are in the presence of Jesus, we are in the presence of God, and that because God is the sustainer of all life, the provider of all nourishment, the source of all light and life and love and gentleness and healing and comfort and joy, well then, God is here among us to bring to completion not the chosen few, not the select and the holy, but the whole of creation, which happily includes each and every human being.

And being a witness to that truth is exactly what this experiment of St Elizabeth’s is all about.

While on most Sundays in nearly every parish in the nation, you will find people at worship who look alike, talk alike and smell alike, that is not the case here.

Here we worship in six different languages, with people from completely different backgrounds and cultures and sexual orientations; a mix of current businessmen and ex-cons,  of saints and sinners, socialists and Republicans, and just about every other category that one can think of when one is dreaming up the definition of a motley crew!

It is not always easy, and while misunderstandings and disagreements easily occur among folks from the same backgrounds, how much easier for such things to arise when world views are so different, sometimes even colliding.

And yet, into this mixed plate of lives, you do not have to look hard to see the Holy Spirit smiling.

I have one more week with you before heading off to our common motherland, the great continent of Africa, where our first brothers and sisters, fathers and mothers still live, still find joy, still see the hand of God moving in lives that are at once more difficult, yet perhaps more joyous, than many lives in our so called developed world.

May you have the eyes to see yourself for who you truly are.

With thanks to Fr. David Gierlach, Rector, St. Elizabeth’s Episcopal Church, Honolulu, for permission to publish this sermon.