A word to friends and relatives who voted for Trump

I have been struggling with what to say to those I care about who voted for Trump.  I am a woman of color whose two brown adult children now live in an America that is more threatening to their safety and well-being, thanks to the President-Elect. I feel betrayed that some of the people I love chose to put into power a man so many thoughtful, patriotic people have called unhinged and unfit for the White House. That man will make this country a more dangerous place for my children and for me and you were okay with that. But it goes beyond that. I can’t do better than Phil Shailer who wrote this in the Sun Sentinel:

Those of us who have voted in numerous presidential elections surely have had wins and losses. After each of those losses, I suspect that you, like I, were able to accept the results and move forward. But I am having serious problems “getting over” this one. Recently I came to the realization that the problem goes much deeper than just coming to grips with who won. Rather, I have finally discovered that my continuing malaise and distress are due to the reality that several long-time friendships have been changed, most likely forever.

The other day I sent the following email to two friends who were particularly adamant and outspoken in their support of the now president-elect:

Please understand that I am not mad at you because Clinton lost. I am totally unconcerned that you and I have different ‘politics.’ And I don’t think less of you because you voted one way and I another.

And I think even less of all the Republicans, from Romney to Ryan and the list goes on, who said goodbye to integrity and principle and American values just to profit from proximity to power.  I think even less of the enablers, from the circle of Catholics–KelleyAnne Conway, Steve Bannon, Newt Gingrich, the list goes on –of people paying lip service to their faith while enabling a man who has zero understanding of the central Christian call to “love your neighbor.” The hypocrisy and acceptance of the truly ugly by people who would like to be thought of as kind, and respectable, and God-fearing, is nothing short of indecent. A pox on commentators like Chris Matthews of Hardball who continue to fawn on Kelley Anne Conway, offering congratulations to ingratiate themselves with their guest and ensure future appearances. 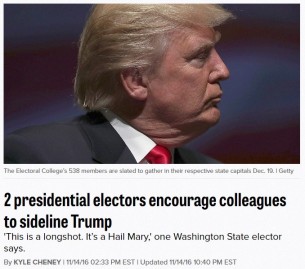 As the electors prepare for December 19 they would do well to remember that 50 of the nation’s most senior Republican national security officials have said that Trump “lacks the character, values and experience” to be president and “would put at risk our country’s national security and well-being.” They go on to say “He is unable or unwilling to separate truth from falsehood. He does not encourage conflicting views. He lacks self-control and acts impetuously. He cannot tolerate personal criticism. He has alarmed our closest allies with his erratic behavior.”  “All of these are dangerous qualities in an individual who aspires to be President and Commander-in-Chief, with command of the U.S. nuclear arsenal.”

I join Fr. Raymond Schroth .S.J. of America magazine who commends the first elector who has said he will vote his conscience, and prays others will join him:

“Mr. Suprun concludes that when the presidential electors meet on Dec. 19, they have “both a legal right and a constitutional duty to vote their conscience.” He believes they should unify behind a Republican alternative, “an honorable and qualified man or woman such as Gov. John Kasich of Ohio,” who, as we reach for unity, I suggest is also worthy of Democratic support. Mr. Suprun has been moved to make this proposal because of the oath he took 15 years ago as a firefighter and prays that his fellow electors will join him.

Since my birthday [Nov 8], I have prayed that someone, somehow, someday would rescue the country I love from chaos and division. I pray in gratitude for this elector’s courage and initiative.”

Much has been said, especially in right wing circles, about the disrespect of taking a knee when the national anthem is played. Affirming the election of Donald Trump would be a much more serious affront to everything America says it stands for: the personal freedoms guaranteed by the constitution, to the very idea of democracy, and leadership in being responsible stewards of the planet. It would imperil our common home.