Leaving Winchester for Front Royal, we stopped to pay homage once again to a local hero: Joe Bageant at a local watering hole he used to frequent regularly when he came back to write about his people: The Royal Lunch. We poked our heads in,  half sure what to expect, having read Bageant’s Deerhunting with Jesus and Rainbow Pie. Kim Johnson, whose daughter and son-in-law are the current owners of the tavern, and Angie Brown welcomed us with a breakfast of eggs and toast and scrapple.

We ate it, sitting at the bar counter, surrounded by the wisdom and whimsy of nearly a hundred years–two more to go–of being the neighborhood bar. It’s also racked up nearly 60 years of service as a restaurant beloved by the locals.

Two young men, Jamie Armel and Jeremie Simpson walked in as we sat there trying to connect with the ghost of Joe Bageant. They said hello and Jamie came around the counter to where we were to offer a handshake. “I washed earlier,” he said politely. Jamie had heard of Joe Bageant. “I’m a hunter too,” he said.

Jeremie has a heating and air con business and finds work within a two hour driving radius of Winchester. Both men spoke of an economy that is still tough, one in which jobs are not easy to come by. 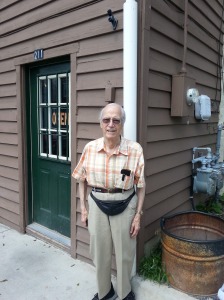 We met Gene Babb just as we were leaving. We quickly learned that he was 89 years old and was stopping by for his customary Tuesday get together at the tavern with a small group of regulars. We explained why we were there and like the others at the Royal Lunch, he very graciously agreed to have his photo taken. We  were also quickly set straight on how to pronounce Bageant.  “It’s Bay-geant,”  he said. “Bay-geant.”

Current owner, Ericka Nicholson. 80-100 hour weeks are not uncommon for her.

He remembers the writer,  his publicist and a photographer coming to the Royal Lunch. “I don’t like people talking about ‘you people from Winchester.’ Stop anyone and ask. Chances are they not from here. Everyone is a stranger. I don’t like a blanket indictment of the people from here.” 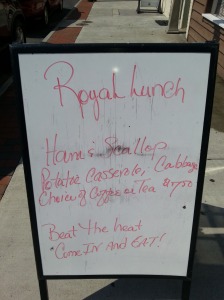 “But Joe was an advocate for his people,” we protested. “He wanted to explain, not indict.” We probably did not change Mr. Babb’s perspective on Joe Bageant–but he did tell us to stop by again. And we will. To remember a warrior for Winchester, someone who made you laugh–and cry– as he gave voice to the soul of his people, near and far.

Plus, Kim Johnson told us the early bird breakfast at the Royal Lunch is just $3.99. 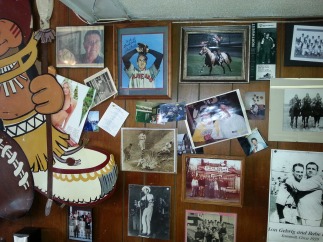